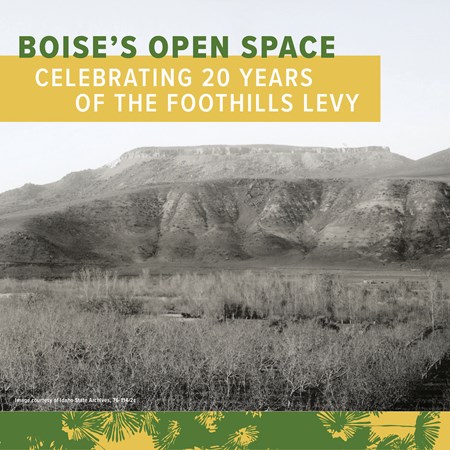 Celebrating 20 Years of the Foothills Levy

This year marks the 20th anniversary of the first foothills levy passed by 59% of Boise voters on May 22, 2001. With a two-year, $10 million dollar commitment, Boiseans showed tremendous support for protecting open space in the Boise Foothills. To celebrate the landmark vote, the Boise City Department of Arts & History invites the public to visit and explore an exhibit of historic photographs and stories unlocking the origins, conditions, and events surrounding the foothills' environment, as well as the impact of the levy on Boise’s open space over the last two decades. The display titled, Boise’s Open Space: Celebrating 20 Years of the Foothills Levy, is on view on the third floor of Boise City Hall starting on Friday, May 21 through September 30, 2021 during regular hours.
The public may also browse the exhibit with an online companion.

Origins and Brief History of the Boise Foothills and Levy

Native Americans lived in the Boise Valley for thousands of years prior to the arrival of Euro-American settlers. Tribes followed seasonal migration patterns, spending summers in the foothills and winters in the valley. With the arrival of Euro-Americans, the foothills were used for ranching, agriculture, and recreation. As recreational activities in the foothills increased, tensions began to mount between private landowners and recreationists. The Boise Front Coalition, which formed in the late 1980s, worked with citizens, foothill users, and government agencies to build a shared vision of the foothills. This was followed by the establishment of the Ridge to Rivers partnership in 1992. This work helped pave the way for the foothills levy.

Beginning in November 2001, the City included the levy in property taxes for commercial, residential, and industrial property. The Foothills Conservation Advisory Committee was established to make recommendations to Boise City Mayor and Council to ensure that the levy funds were spent wisely. Only the Mayor and City Council could approve expenditures from the levy. Funds were used to protect and provide long-term strategies for open space lands, such as Table Rock, Hulls Gulch Reserve, Military Reserve, and Polecat Gulch Reserve, among other conserved properties. The levy ended in 2003 following the collection of the $10 million dollars. In 2015, a second levy passed with 74% support, which provided an additional $10 million dollars for clean water, open space protection, wildlife habitat, and improvement projects. To date, levy funds have been used to protect more than 13,000 acres in the Boise Foothills.

The City of Boise owns and manages more than 5,000 acres in the foothills across 12 open space reserves. For more information about Boise Parks and Recreation’s Foothills and Open Space Division, please visit the department’s open space online resource.