So We Did: Celebrating Women's Suffrage at 100

In 2020, the Boise City Department of Arts & History leads the City’s commemoration of the 100th anniversary of the 19th Amendment, which recognized the right to vote for many women—but not all. A year-long series of programs and events celebrates the Boise individuals who mobilized and empowered women to advocate for suffrage, and expands the conversation to include underrepresented groups. This anniversary brings Boiseans together to talk about the importance of civic participation in our community and address the work still to be done. All events are free and open to the public.

“Workin’ 9 to 5: Boise Suffragists in Downtown Boise"
Downtown history tours often focus on the architecture of buildings and the businesses they held. Invariably, these stories primarily focus on men. The aim of this tour is to depart from the traditional narrative and, instead, show the indelible mark women have left on downtown Boise. Join the adventure (socially distanced, of course) to learn about our built environment through the lens of women’s history. Take a (virtual) walk!

Notes from the City Historian

"Boise Abridged" is a podcast chock-full of great information on Boise history, in 10 minutes or under. In this inaugural three-part series, Boise City Historian Brandi Burns sits down with Boise Arts & History Director Terri Schorzman (masked and socially distanced) to "spill the tea" on Idaho's suffrage history, first covering the origins of the women's voting movement, then digging into suffrage in the Gem State, and finally exploring how women ultimately secured the vote in Idaho and how the work continues today. While this is an incomplete encapsulation of women's suffrage history, we hope this fun and sometimes pithy conversation will peek your interest and encourage you to learn more.

The Little Book of Boise Suffrage is our attempt to create a short and incomplete story of a great movement. Learn about several key figures, buildings, and symbols that together tell the story of Boise's suffrage history and represent many successes of Boise's suffragists. The story does remain unfinished as these successes did not secure voting rights for all women, and even today there is still work to do. Read along!

Suffrage-themed Coloring Pages for Everyone

Grab your coloring materials (yes, glitter counts!) for both you and your little ones and make your world more colorful with these suffrage-themed coloring pages. 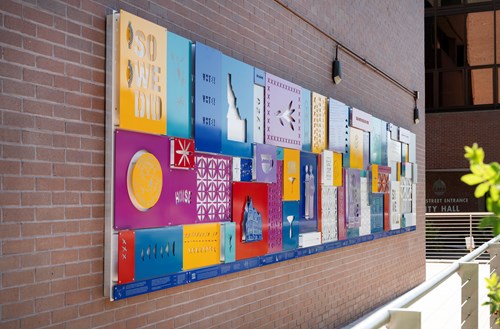 Local artist Stephanie Inman has been selected for the City Hall Women’s Suffrage Public Art project. "Suffrage Quilt" tells the story of Boise's suffrage history with colorful key symbols and patterns. It celebrates the many successes of Boise's suffragists, yet "Suffrage Quilt" remains unfinished to illustrate that these successes did not secure the voting rights for all women, and even today there is still work to do. A timeline at the bottom describes the symbols and tells a broader national story.
The artwork is located on the southern façade of Boise City Hall. Join us for Suffrage Quilt Virtual Dedication on Wednesday, August 26, 2020, at 10 a.m.

So We Did: Celebrating Women's Suffrage at 100
In 2020, the Boise City Department of Arts & History led the City of Boise’s commemoration of the 100th anniversary of the 19th Amendment, which recognized the right to vote for many women—but not all. From Lauren McLean's first proclamation as Mayor of Boise marking "Boise Suffrage Day" to the installation of public art by Stephanie Inman titled "Suffrage Quilt", we review the year-long series of programs and events that celebrated the Boise individuals who mobilized and empowered women to advocate for suffrage, and expand the conversation to include underrepresented groups. We also reflect on the 1918 Flu Pandemic and how it affected the women's suffrage movement, taking heart in the fact that suffragists, despite all odds, continued to advocate for the right to vote and to gain representation, and how important it is to "look at our histories, not to be nostalgic, but to actually be better ourselves."
Produced by Guy Hand.
Watch! So We Did: Celebrating Women's Suffrage at 100

Do you have lived experiences, historical photos, or other information related to Boise’s suffrage movement? Consider sharing them with our History and Archives programs. Contact artsandhistory@cityofboise.org or call (208) 608-7050.

#SOWEDID
Have you taken a leap of faith? Faced adversity, yet persevered? #SOWEDID is a powerful statement of the collective work done in the past and is an inspiration to current Boiseans to be a part of the change they wish to see in their communities. Post and tag your #SOWEDID moments on social media.

Learn about the Idaho Women at 100 campaign.