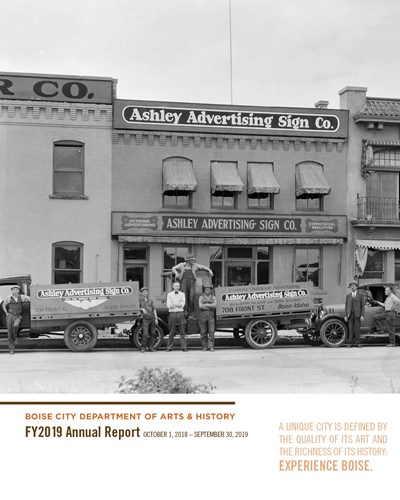 In FY19, the City Archives continued to grow as we accessioned archival materials from other City of Boise departments and began processing community-based collections such as the Burns Studio Collection (accessioned in Fiscal Year 2018), an unparalleled community gift of photographs and cameras from a local photography business. After only one year of operation, the James Castle House was accepted into the Historic Artists’ Homes and Studios Program of the National Trust for Historic Preservation, the first member site in Idaho. With this admission, the James Castle House joined a prestigious network that includes sites such as the Georgia O’Keefe Home & Studio in Abiquiú, New Mexico. Arts & History played a crucial role in supporting efforts led by descendants of the region's original inhabitants to rename a city park and a city-administered foothills reserve in honor of their ancestors. Our other programs – History, Grants, Public Art, Care and Conservation, and general administrative operations that include communications, planning, and cultural programs (such as the Mayor’s Awards for Excellence in Arts & History) continued in full force to round out a busy and productive year and fulfilling our department mission to empower people in Boise to create, engage, and connect with the community.

For a master list of all City created and led plans, including those that need to be retired or updated, please see the 2020 Blueprint Boise Comprehensive Plan Minor Update.